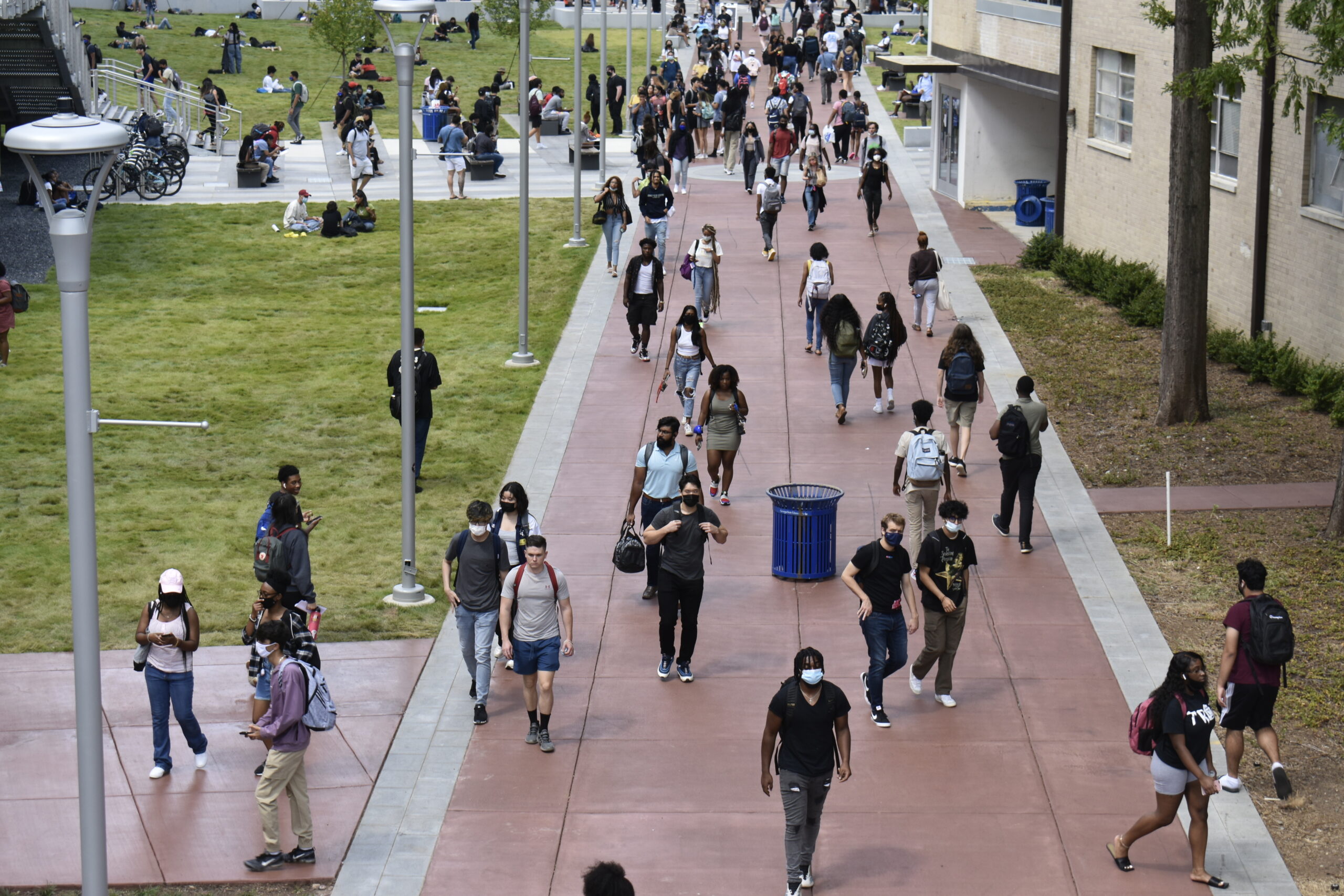 The protests, the first in this week’s planned daily demonstrations around the state, are being organized by the Georgia Chapter of the American Association of University Professors.

“If we get the same amount of people we did today, that’d be great,” Matthew Boedy is the president of the Georgia Chapter of the association and a University of North Georgia professor. “I’m doing a week long to try to get the impact felt, not just a one-time thing. We’re not stopping class, but I’m hoping that people will get a sense of it, and by Friday, maybe we’ll have some momentum.”

Local reports indicate that protests took place at 19 campuses of 17 of the 26 Georgia public colleges. There were varying crowd sizes, with some ranging from small to large.

These calls for change come at a time when some campuses and college towns are seeing an increase in infections and hospitalizations.

The University System of Georgia strongly urges students to wear masks indoors but does not require them to do so, and professors are forbidden from requiring face coverings in their classrooms, leading to some high-profile resignations and pleas from instructors who care for vulnerable family members.

Members of faculty governance groups at several Georgia universities have largely supported mask mandates on their own campuses, but without the university system’s blessing, they cannot do more than ask students to mask up.

Last week, Teresa MacCartney, acting Chancellor, stated that the university system will do everything it can to protect students, employees, and not defy Gov. Brian Kemp’s call not to require masks or vaccines. Board members are appointed by Georgia’s governor.

“Gov. Kemp said last week at the Capitol he believes mandates cause divisions on campuses. He does not support them,” She said.

Boedy said he is calling on the regents to defy the governor and implement a mask requirement as it did last June in the face of mounting COVID-19 cases.

“The regents could do a mask mandate tomorrow. They don’t need the governor’s permission, they bucked him last year to do it. He didn’t want a mass mandate,” Boedy stated. “And so to now all of a sudden follow the governor’s expectations seems wrong.”

Robert Weber, an associate professor at the Georgia State University College of Law, was one of a handful of protesters outside Georgia State’s student center Monday morning. He said the students he teaches generally mask up with only gentle reminders.

A small group of professors gathered at Georgia State University Monday, kicking off a week of protests against the state’s COVID-19 policies. Ross Williams/Georgia Recorder

“We emphasize to them that a lot of their classmates and a lot of their professors have situations personally and at home, and being infected by COVID is going to cause a lot of problems, and we ask them respectfully, reminding them also that they’re about to enter a profession that brings certain expectations of collegiality and concern for others into account, and they’ve done a really good job, so far,” Weber said.

But that’s not true across the entire campus, he added.

“I hear stories from colleagues, also members of the AAUP working in other parts of the campus, who are describing a very different situation,” He stated that. “You know, 150, 200 students packed into crowded classrooms, no room to distance, 40 to 50% masking. I get people telling me that they have to come to work and teach in these environments that are really Petri dishes and then go back to take care of their 90-year-old infirm mother who lives with them.”

A mask mandate would allow more confidence for professors who care for elderly relatives or unvaccinated children or who have immune system problems, said Jacque-Corey Cormier, a clinical assistant professor of health promotion and behavior in the School of Public Health at Georgia State who organized the protest there.

There’s also the question of local control, Cormier added. He stated that each university can decide what safety measures work best for them. What works for Georgia State University in the heart of Atlanta may not be applicable to smaller college towns.

“We don’t have gates, we’re not fenced in, we’re not in a small town,” He said. “Our students have to interact and pass by people who have nothing to do with Georgia State, and being able to have that autonomy to do local governance, I believe, is important.”

“The unifying theme is that there needs to be an immediate mask mandate to slow the spread within classrooms until things are more under control in our hospitals,” She said. “At the UGA gathering, we also were asking for a vaccine mandate. We think that there should be a vaccine mandate or for people who are not able to be vaccinated for whatever reason, that they should have mandatory weekly testing. That was the two-prong approach of what we were asking for, but the goal is, we want to stay in-person, to have our classes be safer and to protect our more vulnerable students and faculty and staff on campus.”

Other universities are asking for a mask mandate but not required COVID-19 vaccinations, Frick said, adding that those decisions should be made by universities based on their own needs.

“Right now, things are bad all throughout the state, but there may come a point where Athens is looking better, but south Georgia still looks bad, or vice versa,” she said. “So it doesn’t need to be a one-size-fits-all. Hopefully, there will come a point where there won’t be the need for such restrictive measures, but that should be driven by local data, should be driven by how things are looking on the ground.”

“Members of the Higher Education Committee are calling on the governor to do more, honestly, by doing less,” Rep. Jasmine Clark (a Lilburn Democrat) is a member of the higher ed commission and holds a doctorate from Emory University in microbiology. She also teaches.

“Remove the stranglehold from our universities,” Clark said. “Let them make decisions that are best for their communities, for their campus, for their students, for their faculty.” 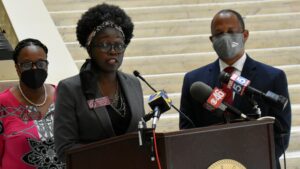 But politicians coming to an agreement on masks could be tough in a climate in which one’s stance on masks and vaccines has become a political signifier to many, and the desire for required masks is not shared by all of Georgia’s campus-goers.

Michael Francis, a doctoral candidate at the University of Georgia in bioinformatics, organized a counterprotest that attracted dozens of students from surrounding areas, he said.

“I think a lot of actually really good conversation happened, which I was really happy about,” He said. “A lot of support from people walking by. There were people walking by who supported our cause, and there was a vocal group of people who didn’t support what we were doing and who were heckling us, but yeah.”

Francis said his research has led him to conclude that cloth or paper face masks are not effective at stopping COVID-19 viruses from spreading.

The Centers for Disease Control and Prevention recommend community use of multi-layered cloth face masks and say they are effective at preventing both the exhalation and inhalation of virus-laden respiratory droplets.

Francis said he has no problem with people choosing to wear masks or get vaccines, but requiring it is a bridge too far.

“We are opposing vaccine and mask mandates,” He said. “It’s not an anti-vax group. We think the vaccines are great. Masks are great for people who want to wear them. But we’re just against coercion and firing people from their jobs.”

Francis said he’s gotten some blowback from professors for his stances, but he’s not backing down.

“There’s definitely a ton of social pressure, but I’m not going to indefinitely concede my ability to breathe air freely, which I believe is a basic human right,” He said. “If they had clearly defined goals, like for example, we’re going to wear a mask until this number gets to this and this number gets to this, and then we can all stop wearing them. But at this point, it’s become a virtue signaling, political affiliation symbol, and I think it’s becoming less and less about the science and more and more about politics and compliance, authoritarianism.”

Francis may have many opportunities to question the protesting professors about the goals of the demonstrations, which will continue this week on 19 campuses, including UGA.

“We have a slate of speakers lined up every day,” Frick said. “Essentially, every day we have one or two faculty members, a staff member, a student, a community member, and a medical person, a doctor, local doctor, local nurse, someone like that. Tomorrow we have a county commissioner, and on Thursday, the mayor of Athens is slated to come speak. So we’ve worked really hard to open it up to a variety of voices” 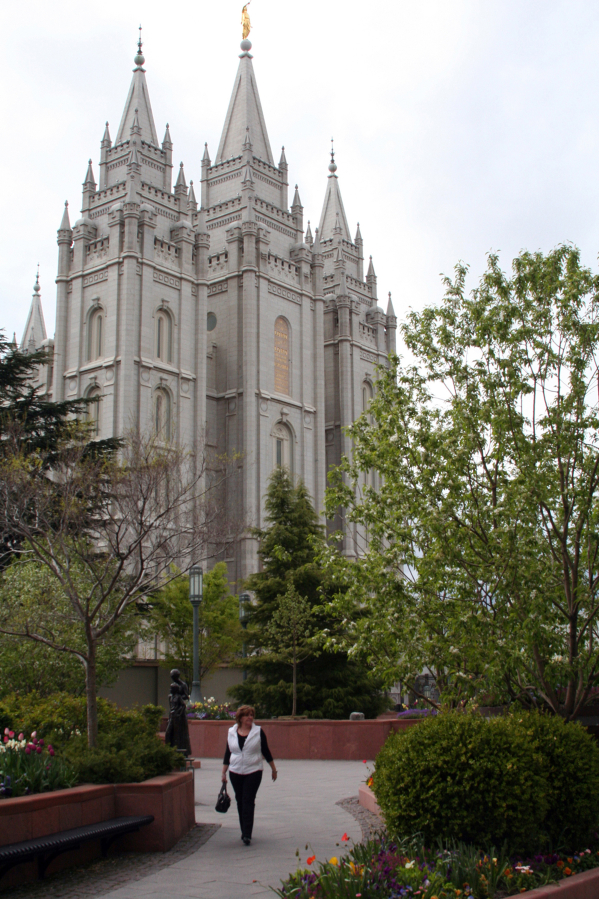 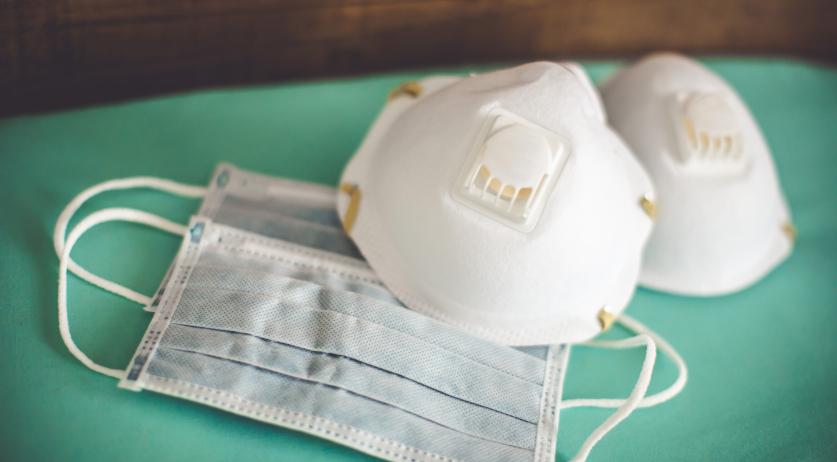 People must continue to keep 1.5 meters away from each other at coronavirus test and Covid-19 vaccination locations, even after Saturday. In addition, they must wear face masks, even though those rules no longer apply to most other locations in the rest of the country. This should reduce the chance of people infecting one another, as…